Under Attack, Feds Get Defensive about More Bonds 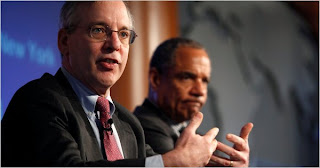 From the NY Times Today;

With the Federal Reserve under attack at home and abroad, it is making an unusual public bid to keep itself away from the political crossfire.

After a barrage of criticism over the last week — including from foreign leaders, Congressional officials, economists and Alan Greenspan, the former Fed chairman — the Fed came out to explain its efforts to inject $600 billion more into the sagging economy.

One worry of Fed watchers as well as its defenders is that some of the domestic criticism may have the subtext of challenging the Fed’s traditional independence in deciding monetary policy without political interference.

In a rare on-the-record interview, William C. Dudley, president of the Federal Reserve Bank of New York, said that the Fed’s move was not intended to affect the value of the dollar, but rather to encourage a faster, stronger recovery that will also assist international growth.

“We have no goal in terms of pushing the dollar up or down,” Mr. Dudley said. “Our goal is to ease financial conditions and to stimulate a stronger economic expansion and more rapid employment growth.”

And in an interview with The Wall Street Journal, the Fed’s new vice chairwoman, Janet L. Yellen, defended the decision in broadly similar terms. “I’m having a hard time seeing where really robust growth can come from,” she said. “And I see inflation lingering around current levels for a long time.” Ms. Yellen said she was “not happy to see us caught up in a political debate."

The comments by Mr. Dudley, who is also the vice chairman of the Federal Open Market Committee, which sets monetary policy, and by Ms. Yellen amounted to an unusual rebuttal, the first by top Fed officials, of criticism of its decision this month to pump money into the banking system. The plan is to spur the recovery by buying government securities to lower long-term interest rates.

Kenneth A. Froot, who teaches international finance at Harvard Business School, said, “The Fed needs to get the word out more clearly” because of the politically volatile times. Mr. Froot added, “This is a very rare circumstance where the basic authority we vest in institutions like the Fed has, more than ever, been challenged,” by politicians and economists who are often identified with political parties.

The bond markets have been increasingly uneasy about the Fed’s actions. On Monday, bond prices fell and yields jumped as a result of the concerns.

The criticism has tended to fall along three lines. Some have accused the Fed of deliberately weakening the dollar to make American exports more competitive. Others fear the Fed’s decision could ignite inflation down the road. Still others say the policy will be ineffective absent additional fiscal stimulus.

Fed officials were clearly unsettled by an opinion piece by Mr. Greenspan in The Financial Times on Thursday, at the start of meetings of the Group of 20 nations in Seoul, South Korea. Mr. Greenspan said the United States was “pursuing a policy of currency weakening” and increasing the risks of trade protectionism.

In an open letter to Ben S. Bernanke, the Fed chairman, on Monday, a group of conservative economists, writers and investors urged that the Fed’s action “be reconsidered and discontinued,” arguing that the bond purchases “risk currency debasement and inflation.” The group included Michael J. Boskin, a former chairman of the White House Council of Economic Advisers; the historian Niall Ferguson; Douglas Holtz-Eakin, a former director of the Congressional Budget Office; and the economist John B. Taylor, one of Mr. Bernanke’s most prominent critics.

Mr. Dudley did not single out any critic, but suggested that the criticisms were unfounded.

While Mr. Dudley said the effect on the dollar was not a consideration, he acknowledged that when interest rates adjust, “oftentimes there will be consequences for the dollar.” He added, “We have seen some dollar weakness in this period, but it doesn’t seem to be unusual, given the changes that we’ve seen in interest rates in the U.S. compared to interest rates abroad.”

Mr. Dudley rejected the idea that the Fed might be setting the stage for uncontrollable inflation in years to come. He said the Fed had tools for draining the bank reserves sitting on its balance sheet.

“We are very, very confident that those tools will be completely effective at keeping inflation in check,” he said. “We are completely willing to use those tools, when the time comes, to prevent an inflation problem. Higher inflation is not a way out. It is not a solution.”

Mr. Dudley argued that the Fed’s efforts had their intended effect. Since August, when the Fed first hinted that it might take further steps to spur the recovery, stock prices have risen and long-term interest rates have fallen. That makes it easier for consumers to buy homes or refinance mortgages, and for businesses to borrow and invest.

“You’ve seen a significant easing of financial conditions over that time period,” he said. “I have to believe that the expectation of a second large-scale asset purchase program was the primary driver of those changes.”

Even so, Mr. Dudley cautioned, “One shouldn’t view this instrument as a panacea or a magic wand that’s going to make the economy recover rapidly.” He said the Fed’s action, known as quantitative easing, was “not going to be extremely powerful” but was nonetheless necessary to reduce the risk, however slim, of a double-dip recession.

“It’s going to be a long and bumpy road to a strong and vigorous expansion, but this will be helpful rather than hurtful,” he said.

Uncertainty about fiscal policy — whether the Bush-era tax cuts will be extended, and in the long term, how the nation will rein in its record deficits — has complicated the recovery, Mr. Dudley said.

Asked whether fiscal gridlock had forced the Fed to act, he said, “We’re going to worry about what we can worry about, which is monetary policy.” The Fed, he said, has to “take the world as it is.”

Mr. Dudley, who joined the New York Fed in 2007 from Goldman Sachs, where he was the chief United States economist, also provided details about how the Fed’s outlook had evolved.

“We were going into the year expecting the economy to pick up steam,” Mr. Dudley said. In the spring, “We were starting to see the glimmers” of a healthy recovery in private-sector employment, he said. But by the summer, growth began to stall; it is now estimated at an annualized rate of 2 percent. Inflation, already low, fell further.

The economy was “vulnerable to a shock that could tip us into deflation,” he said.

In recent speeches, Mr. Dudley and Charles L. Evans, president of the Chicago Fed, mentioned the possibility of allowing inflation to run higher in the future to make up for inflation’s being too low today, an approach known as price-level targeting. But in the interview, Mr. Dudley emphasized that he had not endorsed that approach.

“The problem with a price-level target is that it’s difficult to explain what you’re doing in a way that doesn’t create larger anxiety about the long-term inflation target,” he said. “We clearly want people to understand that we are committed to price stability over the long run.”

Mr. Dudley declined to discuss the deliberations of the committee, but acknowledged that the decision was not easy.

“Reasonable people can disagree about how big the costs are versus how big the benefits are,” he said. “It’s completely reasonable to expect that not everyone is going to see it exactly the same way, because these policies have not been used much on a historical basis.”