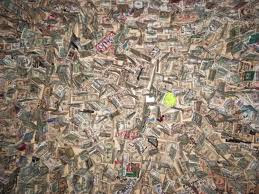 "I thought this was going to be a whimpering thing about fiat currency, but I was totally wrong. This is a complex narrative which really seeks to stab at the heart of the issues it confronts. The imagery is portrayed in a stark manner, you ...get the sense that the auteur behind the lenses is interested in letting the pictures explain the circumstances rather than relying entirely on dialogue or talking heads. The interviewees are also well selected. There a conscious effort to place experienced people at the heart of the story rather that critics or other people indirectly associated with the issues. Whatever your politics this is worth watchin"
-Anthony

In this 1 1/2 hr. documentarty you will learn just a few of the tough tactics multinational corporations use to bully third world countries who are desperate and are willing to accept slave wages and appallingly poor working conditions that are dangerous and deadly for employees.
Children are also sold to﻿ homes where they work and are often sexually abused. Construction of civil projects is another area where children work.﻿

Children are seen working on the streets as vendors, shoe shiners, beggars, prostitutes and pimps. Nepalese children are trafficked into India and sold to work in the carpet making industry and sex industry.

In part 2 they﻿ discuss rising costs and the comparison of wages between workers in India and Europe. The reality is that these large multinational corporations make billions in profits while the poor worker works longer hours for less money. These corrupt corporations falsely claim they cannot afford to pay workers more money﻿ when the truth is that they take advantage of the poor to their great advantage.

It is estimated that there are 2.6 million child workers in Nepal. Children are forced﻿ to work in sweatshops for long hours and in horrible conditions that can cause﻿ serious injury and death.

Child slave labour is a severe problem on cocoa farms. Slave traffickers steal children from third world countries and sell them to countries like Cote d'Ivoire. Most children are stolen from Mali, South Africa. These children are tricked into cooperating with traffickers and are deceived into believing they will be better off. In Africa, nearly 200,000 children are trafficked﻿ every year. They are under fed, live in poor conditions and are forced to﻿ work day and night.

Many industries use cheap child slave labour in third world countries to make larger profits. Children are forced to work as prostitutes and street vendors, on farms, and in﻿ homes, mines and sweatshops producing shoes, clothing and toys. 22,000 children﻿ die by labour related disasters each year.

Children earn about six cents per hour in Bangladesh.

Sweatshops in Bangladesh are notorious for fires and poor safety.

Slavery is a form of forced labour in which people are considered to be, or treated as, the property of others. Slaves can be held against their will from the time of their capture, purchase or birth, and﻿ deprived of the right to leave, to refuse to work, or to﻿ receive compensation such as wages.

In 2003, there were 246 million child slave labourers worldwide, including Bangladesh, China, India, Mali, Nepal, Salvador, Thailand, the Philippines and countless other countries.

The Canadian government has a choice and can borrow interest free money from the Bank of Canada. The Bank of Canada can offer provincial and municipal﻿ governments funding at rates that are well below private bank rates.

All countries, on behalf of their citizens, borrow as debt at substantial interest from private banks. More than half of your income tax dollars service the interest﻿ on the debt.

The Canadian federal debt grows by $153 million every day.

Queen Elizabeth II is the legal owner of one sixth of the land on the Earth's surface, more than any other individual or nation. This amounts to a total of 6.6 billion acres﻿ (27 million km²) in 32 countries.

41% of the Earth is owned by 1% or less of the population on Earth.

85% of the Earth's population own nothing.

Source: Kevin Cahill, "Who Owns the World: The Hidden Facts Behind Landownership"

This is the prime reason why those living in western nations' economies, and standards of living, are plummeting so severely. Western economies will not improve. Globalization, as﻿ indicated here, is a race to the bottom for the working classes. 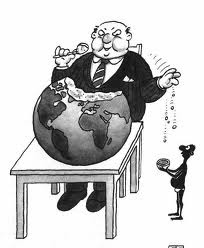