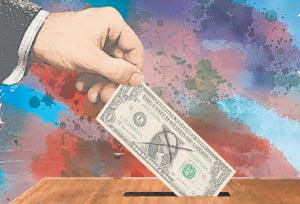 How do you regulate banks effectively, if the Senate is owned by Wall Street?


This week, a disaster hit the United States, and the after-shocks will be shaking and breaking global politics for years. It did not grab the same press attention as the fall of liberal Kennedy-licking Massachusetts to a pick-up truck Republican, or President Obama's first State of the Union address, or the possible break-up of Brangelina and their United Nations of adopted infants. But it took the single biggest problem dragging American politics towards brutality and dysfunction – and made it much, much worse. Yet it also showed the only path that Obama can now take to salvage his Presidency.


For more than a century, the US has slowly put some limits – too few, too feeble – on how much corporations can bribe, bully or intimidate politicians. On Tuesday, they were burned away in one whoosh. The Supreme Court ruled that corporations can suddenly run political adverts during an election campaign – and there is absolutely no limit on how many, or how much they can spend. So if you anger the investment bankers by supporting legislation to break up the too-big-to-fail banks, you will smack into a wall of 24/7 ads exposing your every flaw. If you displease oil companies by supporting legislation to deal with global warming, you will now be hit by a tsunami of advertising saying you are opposed to jobs and the American Way. If you rile the defence contractors by opposing the gargantuan war budget, you will face a smear-campaign calling you Soft on Terror.

Related articles
Obama gets down to business on the economy first
Bernanke survives Senate protest vote
Search the news archive for more stories
To understand the impact this will have, you need to grasp how smaller sums of corporate money have already hijacked American democracy. Let's look at a case that is simple and immediate and every American can see in front of them: healthcare. The United States is the only major industrialised democracy that doesn't guarantee healthcare for all its citizens. The result is that, according to a detailed study by Harvard University, some 45,000 Americans die needlessly every year. That's equivalent to 15 9/11s every year, or two Haitian earthquakes every decade.

This isn't because the American people like it this way. Gallup has found in polls for a decade now that two-thirds believe the government should guarantee care for every American: they are as good and decent and concerned for each other as any European. No: it is because private insurance companies make a fortune today out of a system that doesn't cover the profit-less poor, and can turn away the sickest people as "uninsurable". So they pay for politicians to keep the system broken. They fund the election campaigns of politicians on both sides of the aisle and employ an army of lobbyists, and for their part those politicians veto any system that doesn't serve their paymasters.

Look for example at Joe Lieberman, the former Democratic candidate for Vice-President. He has taken $448,066 in campaign contributions from private healthcare companies while his wife raked in $2m as one of their chief lobbyists, and he has blocked any attempt in the Senate to break the stranglehold of the health insurance companies and broaden coverage.

The US political system now operates within a corporate cage. If you want to run for office, you have to take corporate cash – and so you have to serve corporate interests. Corporations are often blatant in their corruption: it's not unusual for them to give to both competing candidates in a Senate race, to ensure all sides are indebted to them. It has reached the point that lobbyists now often write the country's laws. Not metaphorically; literally. The former Republican congressman Walter Jones spoke out in disgust in 2006 when he found that drug company lobbyists were actually authoring the words of the Medicare prescription bill, and puppet-politicians were simply nodding it through.

But what happens if politicians are serving the short-term profit-hunger of corporations, and not the public interest? You only have to look at the shuttered shops outside your window for the answer. The banks were rapidly deregulated from the Eighties through the Noughties because their lobbyists paid politicians on all sides, and demanded their payback in rolled-back rules and tossed-away laws. As Senator Dick Durbin says simply: "The banks own the Senate," so they had to obey.

It is this corruption that has prevented Barack Obama from achieving anything substantial in his first year in office. How do you re-regulate the banks, if the Senate is owned by Wall Street? How do you launch a rapid transition away from oil and coal to wind and solar, if the fossil fuel industry owns Congress? How do you break with a grab-the-oil foreign policy if Big Oil provides the invitation that gets you into the party of American politics?

His attempt at healthcare reform is dying because he thought he could only get through the Senate a system that the giant healthcare corporations and drug companies pre-approved. So he promised to keep the ban on bringing cheap drugs down from Canada, he pledged not to bargain over prices, and he dumped the idea of having a public option that would make sure ordinary Americans could actually afford it. The result was a Quasimodo healthcare proposal so feeble and misshapen that even the people of Massachusetts turned away in disgust.

Yet the corporations that caused this crisis are now being given yet more power. Bizarrely, the Supreme Court has decided that corporations are "persons", so they have the "right" to speak during elections. But corporations are not people. Should they have the right to bear arms, or to vote? It would make as much sense. They are a legal fiction, invented by the state – and they can be fairly regulated to stop them devouring their creator. This is the same Supreme Court that ruled that the detainees at Guantanomo Bay are not "persons" under the constitution deserving basic protections. A court that says a living breathing human is less of a "persons" than Lockheed Martin has gone badly awry.

Obama now faces two paths – the Clinton road, or the FDR highway. After he lost his healthcare battle, Clinton decided to serve the corporate interests totally. He is the one who carried out the biggest roll-back of banking laws, and saw the largest explosion of inequality since the 1920s. Some of Obama's advisers are now nudging him down that path: the appalling anti-Keynesian pledge for a spending freeze on social programmes for the next three years to pay down the deficit is one of their triumphs.

But there is another way. Franklin Roosevelt began his Presidency trying to appease corporate interests – but he faced huge uproar and disgust at home when it became clear this left ordinary Americans stranded. He switched course. He turned his anger on "the malefactors of great wealth" and bragged: "I welcome the hatred... of the economic royalists." He put in place tough regulations that prevented economic disaster and spiralling inequality for three generations.

There were rare flashes of what Franklin Delano Obama would look like in his reaction to the Supreme Court decision. He said: "It is a major victory for big oil, Wall Street banks, health insurance companies, and other powerful interests that marshal their power every day in Washington to drown out the voices of everyday Americas." But he has spent far more time coddling those interests than taking them on. The great pressure of strikes and protests put on FDR hasn't yet arisen from a public dissipated into hopelessness by an appalling media that convinces them they are powerless and should wait passively for a Messiah.

Very little positive change can happen in the US until they clear out the temple of American democracy. In the State of the Union, Obama spent one minute on this problem, and proposed restrictions on lobbyists – but that's only the tiniest of baby steps. He evaded the bigger issue. If Americans want a democratic system, they have to pay for it – and that means fair state funding for political candidates. Candidates are essential for the system to work: you may as well begrudge paying for the polling booths, or the lever you pull. At the same time, the Supreme Court needs to be confronted: when the court tried to stymie the new deal, FDR tried to pack it with justices on the side of the people. Obama needs to be pressured by Americans to be as radical in democratising the Land of the Fee (CRCT).

None of the crises facing us all – from the global banking system to global warming – can be dealt with if a tiny number of super-rich corporations have a veto over every inch of progress. If Obama funks this challenge, he may as well put the US government on e-Bay – and sell it to the highest bidder. How would we spot the difference?