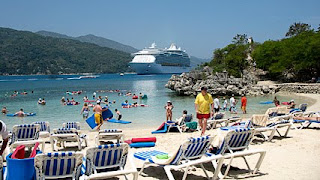 Dave Thier
Contributor
(Jan. 18) -- It would seem that nothing, not even a devastating earthquake that has claimed tens of thousands of lives, can deter the American vacationer's drive to unwind. To prove the point, one cruise ship from Florida-based Royal Caribbean International landed in Haiti on Friday, the Guardian reports, and three more are due in this week.

Royal Caribbean cruise passengers visit Labadee Beach, a walled resort only 60 miles from the epicenter of the quake. On its Web site, the company advertises "pristine beaches," "breathtaking scenery" and "native charm." Armed guards patrol the perimeter, even under normal conditions.

Caribbean vacations have always provided a stark contrast between decadent resorts and the impoverished countries that house them, but not even the magic of the cruise ship could hide the horror at this uncommon port of call.


Joe Kafka, AP
Royal Caribbean is continuing to ferry passengers to its Haitian resort at Labadee despite the misery wrought by the earthquake in Port-au-Prince.
"I just can't see myself sunning on the beach, playing in the water, eating a barbecue and enjoying a cocktail while there are tens of thousands of dead people being piled up on the streets," one commenter wrote on an Internet forum about cruises.

While Royal Caribbean's decision to cruise on to the destroyed country might seem callous, the company defends its decision, saying its ships are transporting not just cruise passengers but also foodstuffs for Haitians. The company has promised to use 100 percent of the proceeds from its cruise visits to Labadee to benefit victims of the quake.

More Coverage:
- Miraculous Rescues Continue
- Quake Orphans Thousands
- Aid Follows Refugees Into Jacmel
- Dad Found Alive With Goodbye Note
- New Satellite Photos
- Quake Stirs Painful Memories
- Did Katrina Spur Haiti Donations?
- DJ Hits Airwaves for Aid Mission
- Dead Left Where They Lie
- General Downplays Violence
- How You Can Help
"In the end, Labadee is critical to Haiti's recovery; hundreds of people rely on Labadee for their livelihood," Vice President John Weis told The Guardian. "In our conversations with [Haiti's special envoy to the U.N.] Leslie Voltaire, he notes that Haiti will benefit from the revenues that are generated from each call."

Cruises and resorts suffer from the same moral difficulties as sweatshops. On one hand, the symbolism behind impoverished workers slaving to provide luxuries to Western consumers is repulsive, while on the other hand, those industries are vital to the economies of developing nations. Guardian columnist Gwyn Topham points out that Friday's visit was really just business as usual -- the only difference was scale.

"Tourism provides a microcosm of modern globalized inequality, with all the advantages or injustices it bestows on those on different sides of the divide," he wrote. "From the Caribbean to Southeast Asia, cheap labor and land allow holidaymakers to relax in style for less."

Some passengers are determined to make the best of their sunny day in hell. "I'll be there on Tuesday, and I plan on enjoying my zip line excursion as well as the time on the beach," one told The Guardian.

Royal Caribbean says it is providing "at least $1 million in humanitarian relief" to Haiti.