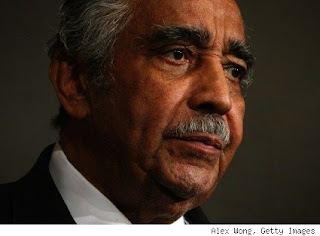 Rep. Charlie Rangel (D-N.Y.) has temporarily given up his chairmanship of the House Ways and Means Committee, days after being admonished by an ethics panel for taking two corporate-sponsored trips to the Caribbean in violation of House rules.

In remarks Wednesday morning in a House press gallery, Rangel said he had sent a letter to Speaker Nancy Pelosi "asking her to grant me a leave of absence" until the ethics committee completes its investigation. The announcement leaves the door open for Rangel, 79, to reclaim the position if he is eventually cleared by the ethics committee.

The panel is continuing to investigate Rangel's campaign finances and unreported income from rental properties.

The 20-term congressman did not answer questions about his decision or a possible replacement, saying only that the situation had brought distracting attention and he is stepping down "in order to avoid my colleagues having to defend me during their elections," Politico reported.

The Ways and Means chairmanship could temporarily go to Rep. Pete Stark of California, the committee's second-ranking Democrat, according to ABC News.

Pelosi released a brief statement noting that she will honor Rangel's request for a leave and commending him "for his decades of leadership on jobs, health care, and the most significant economic issues of the day."

Rangel's move comes when it appeared increasingly unlikely that he would survive a House vote this week on stripping him of chairmanship of the powerful tax writing committee.

"We don't have the votes to save him," one Democratic member told NBC on Tuesday.

The ethics committee issued a report last Friday finding that members of Rangel's staff knew that several trips the congressman took to the Caribbean in 2007 and 2008 were indirectly funded by private corporations. The committee added that there is no evidence that Rangel himself knew who paid for the trips, but the committee formally admonished him and his staff nonetheless.

More worrisome for the congressman is a much larger investigation by the committee looking into whether he failed to pay the required taxes on a property in the Dominican Republic. A separate inquiry is also looking into an allegation that Rangel improperly used his office to raise money for a New York City academic center named for him.

Rangel, who has served in Congress since 1971, had remained defiant, slamming newspapers for their investigations and criticizing the ethics panel on the House floor.


Click on title above for original article;
http://www.politicsdaily.com/2010/03/03/charlie-rangel-to-take-leave-of-absence-from-ways-and-means-co/
Posted by Mz.Many Names at 11:36 AM