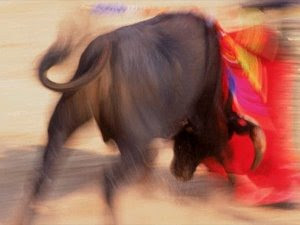 Of course they are greedy blood-thirsty b@$T@rD$; the participants, the promotors, and the spectators as well. Its all about money all around,...that is, blood and money, which makes it the worst kind of greed of all - when profits are made off of the blood and suffering of the innocents. Humanity, for shame!

The ACI officer said bullfighters were using long wooden sticks with long sharpened nails on the end to stab and torment the bulls.

The officer said he noticed blood and puncture wounds on the bull when the animal was being led out of the ring.

The bull had been repeatedly stabbed with up to eight sticks, according to ACI.

After seeing the bloodied bull, the humane officer went into center ring, held up his badge and ended the bullfight.

ACI says more than 30 sticks with nails on the end were confiscated, and the company operating the bullfight was informed that stabbing a bull is a violation of California state animal cruelty laws.

Jane Garrison, spokeswoman for Animal Cruelty Investigations, says they "hope the DA prosecutes this case to the fullest extent of the law and the City of Artesia makes this bullfight its last."

Those who organize the fight say the bulls wear heavy padding so they won't be hurt by the sticks.
Copyright © 2009, KTLA-TV, Los Angeles