From the Jr. Deputy Accountant; http://www.jrdeputyaccountant.com/

Really? What the xxxx is this bullshit and why are we still sitting here allowing this to go on? I don't even really have commentary for this as my jaw is still on the ground. The absolute audacity at this point has become too much to take. The fact that you allow it, America, without torching the joint down in a mass social upheaval might be more shocking than the behavior itself. I don't advocate violence, of course, but I do advocate someone tell these asshats where they can shove their crackpot schemes that inevitably leave the American taxpayer holding the bag.

PPIP has been a scam from its inception, that much we know. But this? This is full-on financial assrape.

Some banks are prodding the government to let them use public money to help buy troubled assets from the banks themselves.

Banking trade groups are lobbying the Federal Deposit Insurance Corp. for permission to bid on the same assets that the banks would put up for sale as part of the government’s Public Private Investment Program.

PPIP was hatched by the Obama administration as a way for banks to sell hard-to-value loans and securities to private investors, who would get financial aid as an enticement to help them unclog bank balance sheets. The program, expected to start this summer, will get as much as $100 billion in taxpayer-funded capital. That could increase to more than $500 billion in purchasing power with participation from private investors and FDIC financing.

The lobbying push is aimed at the Legacy Loans Program, which will use about half of the government’s overall PPIP infusion to facilitate the sale of whole loans such as residential and commercial mortgages.

Allowing banks to have it both ways would give them added incentive to sell assets at low prices, even at a loss, the banks contend. They claim it also would free up capital by moving the assets off balance sheets, spurring more lending.


Confused? Lost? Not sure what this means for the taxpayer? Let me make it a little clearer for you: 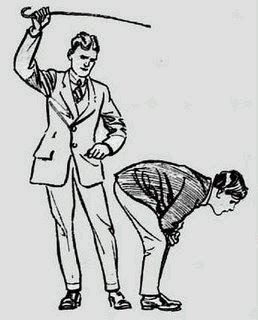 I sincerely hope that clears up any confusion. Oh, and no, the taxpayers are not the ones holding the stick.
Posted by Mz.Many Names at 2:59 PM