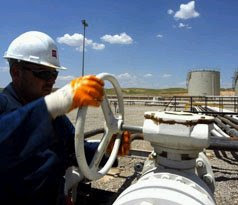 Two years before the invasion of Iraq, oil executives and foreign policy advisers told the Bush administration that the United States would remain "a prisoner of its energy dilemma" as long as Saddam Hussein was in power.

That April 2001 report, "Strategic Policy Challenges for the 21st Century," was prepared by the James A. Baker Institute for Public Policy and the US Council on Foreign Relations at the request of then-Vice President Dick Cheney.

In retrospect, it appears that the report helped focus administration thinking on why it made geopolitical sense to oust Hussein, whose country sat on the world's second largest oil reserves.

"Iraq remains a destabilizing influence to the flow of oil to international markets from the Middle East," the report said.

"Saddam Hussein has also demonstrated a willingness to threaten to use the oil weapon and to use his own export program to manipulate oil markets. Therefore the US should conduct an immediate policy review toward Iraq including military, energy, economic and political/diplomatic assessments."

James Baker, the namesake for the public policy institute, was a prominent oil industry lawyer who also served as secretary of state under President George H.W. Bush, and was counsel to the Bush/Cheney campaign during the Florida recount in 2000.

Ken Lay, then-chairman of the energy trading Enron Corp., also made recommendations that were included in the Baker report.

At the time of the report, Cheney was leading an energy task force made up of powerful industry executives who assisted him in drafting a comprehensive "National Energy Policy" for President George W. Bush.

A Focus on Oil

It was believed then that Cheney's secretive task force was focusing on ways to reduce environmental regulations and fend off the Kyoto protocol on global warming.

But Bush's first treasury secretary, Paul O'Neill, later described a White House interest in invading Iraq and controlling its vast oil reserves, dating back to the first days of the Bush presidency.

In Ron Suskind's 2004 book, "The Price of Loyalty," O'Neill said an invasion of Iraq was on the agenda at the first National Security Council. There was even a map for a post-war occupation, marking out how Iraq's oil fields would be carved up.

Even at that early date, the message from Bush was "find a way to do this," according to O'Neill, a critic of the Iraq invasion who was forced out of his job in December 2002.

The New Yorker's Jane Mayer later made another discovery: a secret NSC document dated February 3, 2001 - only two weeks after Bush took office - instructing NSC officials to cooperate with Cheney's task force, which was "melding" two previously unrelated areas of policy: "the review of operational policies towards rogue states" and "actions regarding the capture of new and existing oil and gas fields." [The New Yorker, February 16, 2004]

By March 2001, Cheney's task force had prepared a set of documents with a map of Iraqi oilfields, pipelines, refineries and terminals, as well as two charts detailing Iraqi oil and gas projects, and a list titled "Foreign Suitors for Iraqi Oilfield Contracts," according to information released in July 2003 under a Freedom of Information Act lawsuit filed by the conservative watchdog group Judicial Watch.

A Commerce Department spokesman issued a brief statement when those documents were released stating that Cheney's energy task force "evaluated regions of the world that are vital to global energy supply."

There has long been speculation that a key reason why Cheney fought so hard to keep his task force documents secret was that they may have included information about the administration's plans toward Iraq.

However, both before and after the invasion, much of the US political press treated the notion that oil was a motive for invading Iraq in March 2003 as a laughable conspiracy theory.

Generally, business news outlets were much more frank about the real-politick importance of Iraq's oil fields.

For instance, Ray Rodon, a former executive at Halliburton, the oil-service giant that Cheney once headed, said he was dispatched to Iraq in October 2002 to assess the country's oil infrastructure and map out plans for operating Iraq's oil industry, according to an April 14, 2003 story in Fortune magazine.


"Working first at headquarters in Houston and then out of a hotel room in Kuwait City, he has studied the intricacies of the Iraqi national oil company, even reviewing the firm's organizational charts so that Halliburton and the Army can ascertain which Iraqis are reliable technocrats and which are Saddam loyalists."


At about the same time as Rodon's trip to Iraq - October 2002 - Oil and Gas International, an industry publication, reported that the State Department and the Pentagon had put together pre-war planning groups that focused heavily on protecting Iraq's oil infrastructure.

The next month, November 2002, the Department of Defense recommended that the Army Corps of Engineers award a contract to Kellogg, Brown & Root to extinguish Iraqi oil well fires.

The contract also called for "assessing the condition of oil-related infrastructure; cleaning up oil spills or other environmental damage at oil facilities; engineering design and repair or reconstruction of damaged infrastructure; assisting in making facilities operational; distribution of petroleum products; and assisting the Iraqis in resuming Iraqi oil company operations."

In January 2003, as President Bush was presenting the looming war with Iraq as necessary to protect Americans, the Wall Street Journal reported that oil industry executives met with Cheney's staff to plan the post-war revival of Iraq's oil industry.

"Facing a possible war with Iraq, US oil companies are starting to prepare for the day when they may get a chance to work in one of the world's most oil-rich countries," the Journal reported on January 16, 2003.


"Executives of US oil companies are conferring with officials from the White House, the Department of Defense and the State Department to figure out how best to jump-start Iraq's oil industry following a war, industry officials say.

"The Bush administration is eager to secure Iraq's oil fields and rehabilitate them, industry officials say. They say Mr. Cheney's staff hosted an informational meeting with industry executives in October [2002], with ExxonMobil Corp., ChevronTexaco Corp., ConocoPhillips and Halliburton among the companies represented.

On April 5, 2003, Reuters reported that the State Department's "Future of Iraq" project headed by Thomas Warrick, special adviser to the Assistant Secretary of State for Near Eastern Affairs, held its fourth meeting of the oil and energy-working group.


"That is likely to thrill oil companies harboring hopes of lucrative contracts to develop Iraqi oil reserves," the news agency reported. "Short-term rehabilitation of southern Iraqi oil fields already is under way, with oil well fires being extinguished by US contractor Kellogg Brown and Root ...


After US troops captured Baghdad in April 2003, they were ordered to protect the Oil Ministry even as looters ransacked priceless antiquities from Iraq's national museums and stole explosives from unguarded military arsenals.

In April 2001, the report laid out a series of unacceptable options, including helping Iraq under Saddam Hussein extract more oil by easing embargoes that were meant to hem Hussein in.

"The US could consider reducing restrictions on oil investment inside Iraq," the report said. But if Hussein's "access to oil revenues was to be increased by adjustments in oil sanctions, Saddam Hussein could be a greater security threat to U.S. allies in the region if weapons of mass destruction, sanctions, weapons regimes and the coalition against him are not strengthened."

Iraq is a "key swing producer turning its taps on and off when it has felt such action was in its strategic interest," the report said, adding that there was even a "possibility that Saddam Hussein may remove Iraqi oil from the market for an extended period of time" in order to drive up prices.

"Under this scenario, the United States remains a prisoner of its energy dilemma, suffering on a recurring basis from the negative consequences of sporadic energy shortages," the report said. "These consequences can include recession, social dislocation of the poorest Americans, and at the extremes, a need for military intervention."

The report recommended Cheney move swiftly to integrate energy and national security policy as a means to stop "manipulations of markets by any state" and suggested that his task force include "representation from the Department of Defense."

"Unless the United States assumes a leadership role in the formation of new rules of the game," the report said, "US firms, US consumers and the US government [will be left] in a weaker position."

Two years after the Baker report, the United States - along with Great Britain and other allies - invaded Iraq. Now, more than six years later, the US oil industry finally appears to be in a strong position relative to Iraq's oil riches.

However, the price that has been paid by American troops, Iraqi civilians and the US taxpayers has been enormous.

Jason Leopold is editor in chief of The Public Record, www.pubrecord.org.