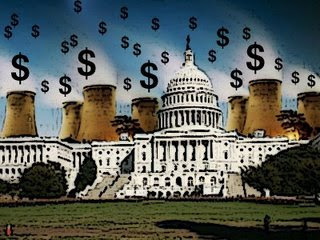 Goldman Sachs and the Cap-and-Trade Jackpot


We have discussed this previously but now that cap and trade is on tap to become the most ridiculous tax in American history (not to mention costly and unfounded), it is all that much more important to take a look at who stands to gain in this game of carbon tax lies and global warming scares.

Senators Dianne Feinstein (D-CA) and Olympia Snow (R-ME) have introduced a bill to make the Commodity Futures Trading Commission the sole regulator of the carbon market created by cap-and-trade legislation.

So does this mean that freebooting Goldman Sachs could be the de facto regulator of the carbon market?


The current chairman of the CFTC is Gary Gensler, formerly of Goldman Sachs.
Goldman Sachs is a part owner of the exchanges where carbon allowances would be traded.

Goldman Sachs has spent millions of dollars lobbying for cap-and-trade legislation in anticipation of making billions of dollars at the expense taxpayers and consumers.
Goldman has a special exemption from the CFTC to exceed the trading limits normally placed on commodity speculators. Not only was this exemption secret for 17 years, the CFTC recently had to ask Goldman for permission to release the letter to Congress!

Goldman Sachs employees are heavy contributors to the Democratic Party giving it over $4.4. million in the last election. Barack Obama received more than $997,000, Feinstein received $24,250, and Snowe received $17,000 from Goldman. All-in-all, this could result in a pretty decent return-on-investment for Goldman.

As the global warming bubble inflates and then bursts, will Goldman Sachs self-regulate all the way to the bank… making record profits at the expense and misery of taxpayers and consumers?

Now the original piece (I'm assuming here that it is a conservative blog because, well, let's face it, the conservatives are pissed over this made up energy mess as we well should be) identifies Goldman Sachs as significant contributors to the Democratic Party but we must remember here that - in Goldman's own words - GS believes in a "perfect hedge" and has of course demonstrated up to this point that it is willing to do just about anything to achieve that. Let's short some Treasurys and the dollar while we are at it why don't we?

Therefore Goldman's political contributions are essentially a moot point unless one looks at said "perfect hedge" and understands that GS doesn't care either way who is in power as long as the Goldman alum keep getting hand-picked for government posts. I do believe, however, that Goldman favored Obama only slightly over McCain for the simple fact that no Republican in his right mind would buy this cap-and-trade bull like our friend Barry O and his wild band of merry financial crack addicts have.

Hook, line, and sinker. And now Goldman is about to not only capitalize on our misfortune but essentially oversee the inflation of yet another bubble, this time one entirely disconnected from reality.

Carbon trading? Oh come on. And you thought CDSs were bad.
Posted by Mz.Many Names at 10:04 PM