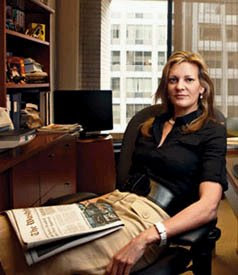 Washington Post Publisher and Chief Executive Officer Katharine Weymouth said today she was cancelling plans for an exclusive "salon" at her home where, for as much as $250,000, the Post offered lobbyists and association executives off-the-record, nonconfrontational access to "those powerful few": Obama administration officials, members of Congress, and even the paper's own reporters and editors.

The astonishing offer was detailed in a flier circulated Wednesday to a health care lobbyist, who provided it to a reporter because the lobbyist said he felt it was a conflict for the paper to charge for access to, as the flier says, its "health care reporting and editorial staff."

With the newsroom in an uproar after POLITICO reported the solicitation, Weymouth and Executive Editor Marcus Brauchli both said they were not aware of the flier.

"This should never have happened," Weymouth told Post media reporter Howard Kurtz. "The fliers got out and weren't vetted. They didn't represent at all what we were attempting to do. We're not going to do any dinners that would impugn the integrity of the newsroom."

Earlier this morning, Brauchili said in a staffwide e-mail that the newsroom would not participate in the first of the planned events - a dinner scheduled July 21 at the home of Katharine Weymouth. Brauchli,was named on the flier as one of the "Hosts and Discussion Leaders."

The offer - which essentially turns a news organization into a facilitator for private lobbyist-official encounters - was a new sign of the lengths to which news organizations will go to find revenue at a time when most newspapers are struggling for survival.

And it's a turn of the times that a lobbyist is scolding The Washington Post for its ethical practices.

"Underwriting Opportunity: An evening with the right people can alter the debate," says the one-page flier. "Underwrite and participate in this intimate and exclusive Washington Post Salon, an off-the-record dinner and discussion at the home of CEO and Publisher Katharine Weymouth.... Bring your organization's CEO or executive director literally to the table. Interact with key Obama administration and congressional leaders."

Kris Coratti, communications director of Washington Post Media, a division of The Washington Post Company, said: "The flier circulated this morning came out of a business division for conferences and events, and the newsroom was unaware of such communication. It went out before it was properly vetted, and this draft does not represent what the company's vision for these dinners are, which is meant to be an independent, policy-oriented event for newsmakers.

"As written, the newsroom could not participate in an event like this. We do believe there is an opportunity to have a conferences and events business, and that The Post should be leading these conversations in Washington, big or small, while maintaining journalistic integrity. The newsroom will participate where appropriate."

In his e-mail to the newsroom, labeled "Newsroom Independence," Brauchli wrote: "Colleagues, A flyer was distributed this week offering an 'underwriting opportunity' for a dinner on health care reform, in which the news department had been asked to participate. The language in the flyer and the description of the event preclude our participation.

"We will not participate in events where promises are made that in exchange for money The Post will offer access to newsroom personnel or will refrain from confrontational questioning. Our independence from advertisers or sponsors is inviolable. There is a long tradition of news organizations hosting conferences and events, and we believe The Post, including the newsroom, can do these things in ways that are consistent with our values."

The flier says: "Spirited? Yes. Confrontational? No. The relaxed setting in the home of Katharine Weymouth assures it. What is guaranteed is a collegial evening, with Obama administration officials, Congress members, business leaders, advocacy leaders and other select minds typically on the guest list of 20 or less...."

Offered at $25,000 per sponsor, per Salon. Maximum of two sponsors per Salon. Underwriters' CEO or Executive Director participates in the discussion. Underwriters appreciatively acknowledged in printed invitations and at the dinner. Annual series sponsorship of 11 Salons offered at $250,000 ‚Ä¶ Hosts and Discussion Leaders ... Health-care reporting and editorial staff members of The Washington Post ... An exclusive opportunity to participate in the health-care reform debate among the select few who will actually get it done.... A Washington Post Salon ... July 21, 2009 6:30 p.m. ...

The first "Salon" was titled "Health-Care Reform: Better or Worse for Americans? The reform and funding debate."


Click on title above to visit article original @ Politico