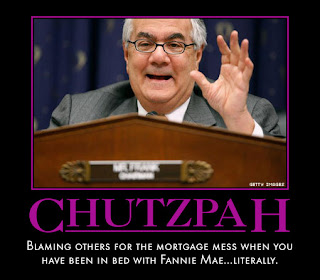 The results are in! As announced by Citizens Against Government Waste President Tom Schatz on CNBC’s “Squawk Box” this morning, House Financial Services Committee Chairman Barney Frank (D-Mass.) is the “winner” of CAGW’s online poll for 2009 Porker of the Year. Chairman Frank finished first in a field of six with a whopping 49 percent of the vote, outdistancing his closest “porky” competitor by nearly a 2 to 1 margin.

Chairman Frank garnered the lion’s share of the vote as a result of his relentless and garrulous role in the failure of Fannie Mae and Freddie Mac, the two mortgage government-sponsored enterprises (GSEs), which the federal government took into conservatorship in September, 2008 after they began to collapse and which remain on life support after an infusion of $112 billion in taxpayer funds. Among GSE defenders, Chairman Frank is without peer. He safeguarded their lavish franchises and fended off any attempts to establish GSE oversight even when it became clear that GSE executives had manipulated earnings statements, given themselves huge bonuses based on bogus numbers, and steered the companies into such a precarious condition that they threatened the entire financial system. In one of his most outrageous statements, Chairman Frank casually announced during a committee hearing in 2003 that he didn’t want “the same kind of focus on safety and soundness that we have in the Office of the Comptroller of the Currency and the Office of Thrift Supervision. I want to roll the dice a little bit more in this situation towards subsidized housing.”

The other 2009 Porker of the Year nominees, in order of votes received, were: Sen. Kay Bailey Hutchison (R-Texas) (26.3 percent), Rep. Maxine Waters (D-Calif.) (6.6 percent), Rep. Russ Carnahan (D.-Mo.) (5.9 percent), and Rep. Neil Abercrombie (D-Hawaii) (5.5 percent). President Barack Obama was the overwhelming favorite in the write-in category with just over 4 percent of the total vote. President Obama even finished ahead of last-place nominee, Transportation Secretary Ray LaHood, who garnered 3 percent of the vote.

Our thanks to the many CAGW members who took the time to participate in this poll. We appreciate your interest and support!


***
Citizens Against Government Waste is the nation's largest taxpayer watchdog group with more than one million members and supporters nationwide. It is a 501(c)(3) nonpartisan, nonprofit organization dedicated to eliminating waste, fraud, abuse, and mismanagement in government. Donations to CAGW are tax-deductible as charitable contributions to the extent permitted by law.

For more information about CAGW, click on title above to visit our website at www.cagw.org. Make a tax-deductible contribution today to support CAGW’s waste-fighting efforts that have saved taxpayers $1.08 trillion.
Posted by Mz.Many Names at 8:50 PM