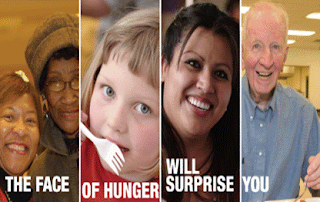 Feeding America has just released the results of an extensive nationwide study of hunger—Hunger in America 2010. The study confirms what we already expected: America’s economic recession is taking a terrible toll on Americans and their ability to feed their families.

Some of the startling statistics include:

Nearly 37 million families were served by Feeding America’s food bank network in 2009, including 14 million children. That means one in eight Americans turn to food banks for food assistance.
Since 2006, there has been a 50 percent increase in the number of children served by the network.
Many Americans are being forced to choose between providing food for their families and other basic necessities of life.
Clearly, the problem of hunger in America is growing as our economic recession continues. Your efforts as a Hunger Advocate are more vital than ever. In fact, during his State of the Union address, President Obama called for a freeze on discretionary spending—a move that could directly impact funding for many of our nation’s hunger-relief programs.

Funding is at risk and we need your help!


Join Feeding America on February 12 for an exclusive conversation about Hunger in America 2010!

Join your fellow anti-hunger advocates for an exclusive conversation about Hunger in America 2010. Feeding America CEO Vicky Escarra and actor David Arquette will be speaking to advocates like you about this ground-breaking study, their commitment to our issue, and how you can help. You will have an opportunity to ask questions and learn what you can do to make a difference in the fight against hunger.

We urge you to take advantage of this unique opportunity to speak with those who are at the forefront of our issue. Join the conversation that will help to shape our advocacy mission in 2010. Don’t miss it!


How else can I help?

We need every advocate’s voice to help us fight for the funding that will be required to feed our nation’s hungry families! In addition to joining the discussion on February 12, please take a few moments today to spread the word and learn more about hunger in your community!

Send a letter to your legislators and urge them to support funding for hunger relief programs.

Tell your friends and family about Hunger in America 2010—and ask for their help in spreading the word.

Click on title above to see study;
http://feedingamerica.org/faces-of-hunger/hunger-in-america-2010.aspx
Posted by Mz.Many Names at 8:22 PM