Gambling a Good Investment: Sands to Open Another Casino Abroad

In addition to its casino in Macau,"The New Las Vegas of the East," 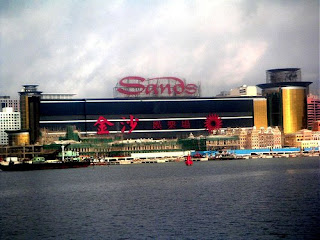 the Sands is building a new gambling establishment in Singapore: The Marina Bay Sands; 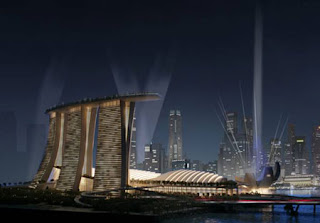 Las Vegas and all of Nevada may be hurting but the Casino Biz apparently is not. People turn to gambling in desperate times, espically those that can least afford it.

I was raised on a vegetable farm in western Washington, so I've always felt more at home in the country than in big, crowded cities. That's why I choose to raise my children in Montana.

When it comes to crowds, it doesn't get more crowded than places like Jakarta, Tokyo, Beijing, Shanghai, Taipei, and Hong Kong, so I seldom turn down a chance to spend some time in an Asian version of Petticoat Junction.

I found that piece of rural heaven in the Thai countryside last weekend at the home of one of my best Thai friends.

It has been a long time since I woke up to the crowing of a sunrise-welcoming rooster instead of a buzzing alarm clock, and even longer since I've been somewhere where the cows, pigs and chickens outnumbered humans.

The water we drank came from rain water captured in a homemade cistern, and three generations of the same happy family shared a one-bedroom, one-bath, 600-square-foot house.

I loved every minute of it, and can't wait to go back. I even learned a very valuable investing lesson while I was there.


My recent stay in the Thai countryside taught me a valuable investing lesson — Asians love to gamble.

Early Sunday morning, a middle-aged Thai woman on a bicycle stopped at the home where I was staying and was greeted like a long, lost friend by my hosts. I assumed she was a neighbor and a good friend.

Well, she was probably both of those things, but she was also a numbers runner. She was there to pick up the lottery numbers from my host family. We're not talking about the multi-million lotto that you see in the United States, but just a small-time lottery for the locals.

How small-time? My host had recently won the local lotto and pocketed what she considered to be a huge windfall ... roughly 30 U.S. dollars.

Whether you're talking about a $30 lotto in the Thai countryside or a bunch of millionaires betting $100,000 on the turn of a card at the luxurious Venetian Macau, Asians love to gamble. Japanese, Chinese, Thai, Vietnamese, Koreans ... they all love to gamble.

Macau, the Las Vegas of Asia

Let me give you an example. I was traveling around Asia with my 25-year-old son Ryan and we went to the Hong Kong Port to catch a high speed ferry to Macau. We were stopped in our tracks by the huge line! Even though they had high-speed ferries leaving every 15 minutes, we ended up waiting for two hours!

The 50-minute boat ride was spectacular ... dozens of sampans filled with Chinese fisherman in traditional coolie hats ... freighters with cargo containers stacked to the sky ... a dense urban jungle of huge condominium towers, many still under construction, hugging the Hong Kong shoreline.

Upon arriving in Macau, we were greeted by yet another ugly picture — more lines! Twisting snakes of people were waiting to clear customs. Heck, I've seen shorter queues at Disney World's most popular rides. Fortunately, they had a separate line for non-Chinese visitors, so Ryan and I were able to avoid much of the madness.

As I quickly found out, these gigantic crowds were the first sign of one of the best investment stories I've ever seen. More on that in a moment.

First, let's look at why all these people are heading to Macau ...

Because it juts into the South China Sea, Macau has a rich history as an Asian trading hub. The Portuguese first arrived there in 1554, and over time they established it as the dominant port of trade between China and Europe. For roughly the next 400 years, Macau was one of the wealthiest and most important cities in Asia.

That changed in 1841 when the British settled in Hong Kong, which had the advantage of deeper-water harbors. Soon, Hong Kong became the major commercial center, and Macau's prosperity slid.

Tourists are flocking to Macau, the Las Vegas of Asia, to gamble.

Then, on Dec. 20, 1999, Portugal transferred Macau to China. The Chinese now let the island operate as a special administrative region, giving it rules and quasi-independence. That's helping to restore Macau to its glorious past in a new millennium.

Macau has a unique mixture of Chinese and Portuguese cultures. To this day, it looks more European than Asian. And its popularity with tourists is exploding — an estimated 18 million visited Macau last year. The majority (55%) came from mainland China, but many more visited from Hong Kong (30%) and Taiwan (9%).

These tourists are flocking to Macau not because of its history or picturesque seaside location. They're coming to GAMBLE.

Macau has become the Las Vegas of China. It is the only city in the region with fully legalized gambling. And gambling is deeply engrained in Asian culture.

How to Play the Macau Card

Plus, Macau is within a five-hour flight of 3 billion people — nearly half the world's population. To put this into perspective, Las Vegas is the same distance from only 450 million people!

Inside Macau's Sands casino, it felt like all 3 billion of those people had picked the same day to visit. The casino ballroom was so crowded, it took me 10 minutes to travel 50 feet from the top of the escalator to the bathroom. The last time I was in a mob that thick was at a Paul McCartney and Wings concert in 1976!

You'd never find those types of crowds in Las Vegas, but I suspect I'll soon be able to find the same mega-crowds in Singapore. That's because the first of two casinos, the Resorts World Sentosa casino, is set to open this month.

This four-hotel, 10-restaurant casino complex will open a Universal Studios in a matter of months, and is expected to pull in more than $2.5 billion of revenues this year.

Boy, wouldn't you like to have a piece of that business? Well you can! This new Singapore casino is owned by Genting Malaysia (4715.KL), which is traded on the Kuala Lumpur stock exchange.

There's more! Las Vegas Sands (NYSE:LVS) will open its Marina Bay Sands casino in May. Like the Las Vegas and Macau Venetian, the Singapore casino is a masterpiece of architecture and over-the-top opulence.

While my simple country friends from rural Thailand can't afford a trip to Singapore or Macau to gamble, there are millions of affluent Asians who can. And they'll be wagering a lot more than the few pennies on a small, country lottery.

They will show up in droves though and that, my friends, will translate into some very hefty earnings for Asian casinos.

For more information and archived issues, click on title above to visit http://www.uncommonwisdomdaily.com
Posted by Mz.Many Names at 1:14 PM