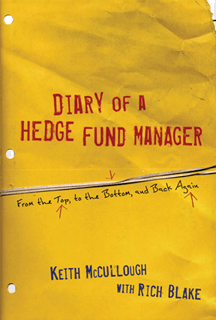 Keith McCullough's book, Diary of a Hedge Fund Manager (Wiley; January 2010), is a short but interesting tale of a hayseed from Western Ontario who skated for the Pemberton Lumber Kings and then finds himself as a 20-year-old freshman at Yale. ("I got in because I could shoot a hockey puck," McCullough told me. "My first paper was deemed ‘ungradable.'")

With finance and economics courses under his belt (including a class taught by Robert Shiller, the respected founder of the Case/Shiller real estate indexes), McCullough lands on Wall Street. He eventually launches and then sells a successful hedge fund to Magnetar Capital. He accepts an offer from the Carlyle Group, the private equity group who were launching a hedge fund ("at the exact top of the market," says McCullough).

But McCullough was fired from Blue Wave, the Carlyle joint venture with two ex-Deutsche executives, because he went short too early in 2007. By November, just as his bets were paying off and the financial crisis began to widen, his bosses at Blue Wave let him go.

As a portfolio manager, McCullough kept a diary of his investment decisions in a "marbleized," school-kid notebook. Now 35, he says he "enjoyed the ride, made eight figures and notched positive returns in 21 of 24 quarters." But, as he notes in his introduction to his book, in the wild, wild world of hedge funds, "unless you run the place, the hedge fund business is about being right each and every quarter. Being right early is called being wrong."

In the days after his firing, and in an effort to shine some light on the secretive world of hedge funds, McCullough began to publish a blog, MCM Macro, "my token attempt to bring some semblance of transparency to the investing world."

He currently runs Research Edge, a nearly 40-person research house meant to bring hedge-fund investing into the open. For $225 per month, you can subscribe to his site, Hedgeye Risk Management (hedgeye.com), and receive real-time, fully transparent investment research (and calls upon which to act) - but without all the Wall Street herd-like "groupthink," as he is fond of saying. Here is one former hedge fund manager's road to transparency.

The trades [recommended on McCullough's blog], I should point out, were done "on paper," but I conducted my PM [portfolio management] process as I always had, and kept at my blog every day to hold myself and the industry accountable for whatever came next. I wrote from a standpoint of full disclosure, total transparency, accountability, concepts desperately lacking in the fund industry, which may as well have operated out of windowless underground bunkers. No, there was one window in: the client letter.

Nothing quite sums up the arrogance and opaqueness of the hedge fund industry as the monthly or quarterly Dear Client letter, the only public peephole a fund will offer its investors and which at their best are as readable and informative as one of those holiday cards from the self-important family needing to catch you up on various members' trivial goings on. Most hedge funds don't want clients to know much, if anything, about the activities of the fund. Because client letters often find their way into the hands of the media, they are issued reluctantly and crafted lawyerly inside pressurized chambers of compressed air. I'm not sure it's even relevant to refer to hedge funds as having investor relations.

(During a January 2009 panel discussion sponsored by Institutional Investor magazine and attended by a few dozen hedge fund marketing executives, the state of client communication was a source of consternation, according to a panelist, Thomas Walek, a top PR Man for hedge funds. Describing that II event during the course of a subsequent presentation, Walek said: "Overall the audience was frustrated and confused about its inability to communicate with clients … to quote one observer ‘the environment is brutal, just brutal.'")

True enough that a lot of rich guys give money to the best hedge fund managers, and leave them alone, and don't want to know and only think to seek out any transparency when things go bad. By that time, there are lawyers involved, and it's too late. The best money managers hate to be trifled by pedestrian investors asking uninformed questions, especially when they call only when things go wrong, never when the fund is roaring along. But having no clients and only trading on paper, I figured, why not let people know exactly what I am doing?

In addition to establishing some transparency, I'd set the stage [with the daily blog] for at least a debate between the bears and the levered long crowd. I received plenty of feedback, some dismissive, some constructive. Once in a while I'd get a hateful email, usually from a hedge fund guy who was levered long. That just made me chirp all the louder because I knew I was going to be right. Here's another post from Sunday, January 6, 2008:

MCM Macro Weekend Strategy, 1/6/08 … ‘Real Hedge Funds Hedge'
If you really want to annoy the mentally inflexible, levered-long and/or concentrated hedge fund managers in this business, remind them how right you were in making a "macro" market call on the bearish side, and then ask them why they didn't see it coming …

The most recent edition of the Hedge Fund game has become very peculiar that way; it's really the only game i [sic] know where losing is met with relative performance justifications. On Monday, the internal dialogue at most U.S. hedge funds will go something like this: ‘but we're only down a couple percent … ‘hearing another guy is getting wrecked, though' … ‘have you heard anyone else's numbers?' … ‘how's Stevie doing - hearing he's upset' … ‘did you call the CFO yet? what's [sic] going on in this stock' … ‘this stock is just too cheap here' …

Now, imagine if real athletes (the only other professionals I can find with the same performance-based compensation packages) behaved this way. What if Pittsburgh Steeler's quarterback, Ben Roethlisberger, went back to the dressing room after last night's 31-29 playoff loss to Jacksonville last night and whispered to the guy next to him ‘but the Redskins lost to the Seahawks by more' … or, worse, ‘those interceptions i [sic] threw don' t matter; i [sic] have my contract guarantee' …