G7 to Convine at Artic Circle 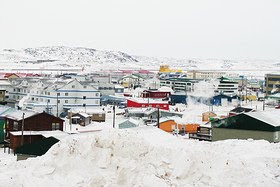 Pack your parkas, finance ministers
G7 convening in a town fewer than 200 miles away from the Arctic Circle

By Liana B. Baker, MarketWatch

SAN FRANCISCO (MarketWatch) -- Finance ministers will trek to Iqaluit this weekend, meeting on the southern tip of Baffin Island where facemasks, snowmobiles and seal meat are hot and the temperatures less so.

In February, the average temperature in Canada's most northern capital dips to minus 18 degrees Fahrenheit. That's a lot chillier than the past February's Group of Seven meeting in Rome.

As the host of the February meeting, Canada had its pick of the location. Officials chose the venue to showcase its Canadian Arctic and to bring the G7 back to the group's roots, where ministers could talk less formally in fireside chats.

The queen of England has been to Iqaluit three times and other dignitaries have visited, but the ministers' arrival will mark the biggest international conference in, and spotlight on the town of fewer than 7,000 people. See story about G7 meeting in Iqaluit.

G7 finance ministers will gather this weekend in icy Iqaluit, Canada's gateway to the Eastern Arctic.

Challenges
Jim Bell, the editor of the Iqaluit's weekly newspaper, Nunatsiaq News, said he was surprised when his home of 30 years was chosen, because of the logistical problems it poses.

"It's not a kind of place that has the resources to completely support a gathering like this," Bell says. "Even in the best of times the telecommunications services can be dicey."

Thanks to its one-runway airport, Iqaluit is considered the major gateway to the Eastern Arctic. The city is a three-hour plane ride away from Montreal and Ottawa, the nearest large cities.

"It's as far away as you can go in three hours from a cultural perspective," says David Scott, the director of the Northern Canada division of the Geological Survey of Canada. "It's exotic, and the landscape is unlike anything else in the south."

Ministers and their entourages could also be stranded if the weather doesn't cooperate, and Iqaluit's newspaper editor said it hasn't been great lately.

"The weather has been very unsettled," Bell says. "We had two really bad snowstorms last weekend. If the weather turns bad, the ministers can be stuck here for far longer than expected."

Lisa Gregoire, who worked as a reporter in Iqaluit in the 1990s, said she thinks Iqaluit was chosen to avoid protestors, who won't be able to afford round-trip airfare ranging from $1,500 to $2,300.

She also called the city exceedingly expensive and a curious choice for a summit during frugal times. Prices are high because food and building materials have to shipped or flown into the city. She remembered a club sandwich and fries costing $20.

"Is it economically feasible in this climate of financial restraint?" asks Gregoire, who added that she thought it ironic that finance ministers would meet in such an expensive location.