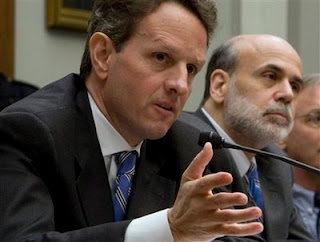 Geithner testified Tuesday before the rescue plan's Congressional Oversight Panel. He faced a battery of questions over the Treasury's public-private partnership investment plan to rid financial institutions of their troubled assets.

His testimony came in the wake of a watchdog agency report that warned administration initiatives could increasingly expose taxpayers to losses and make the government more vulnerable to fraud.

THIS IS A BREAKING NEWS UPDATE. Check back soon for further information. AP's earlier story is below.

WASHINGTON (AP) — Treasury Secretary Timothy Geithner faces a slew of questions about his plans to shore up banks while a watchdog agency warns that Obama administration initiatives could increasingly expose taxpayers to losses.

Geithner is scheduled to testify Tuesday before the Congressional Oversight Panel for the government's $700 billion financial rescue program.

Meanwhile, the rescue program's special inspector general concluded in a 250-page quarterly report to Congress that a private-public partnership designed to rid financial institutions of their "toxic assets" is tilted in favor of private investors and creates "potential unfairness to the taxpayer."

Still, Inspector General Neil Barofksy, using blunt language, offered a series of recommendations to protect the public and took the Treasury to task for not implementing previous advice.

Overall, the report said the public-private partnership — using Treasury, Federal Reserve and private investor money — could total $2 trillion. "The sheer size of the program ... is so large and the leverage being provided to the private equity participants so beneficial, that the taxpayer risk is many times that of the private parties, thereby potentially skewing the economic incentives," the report stated.

In particular, the report cited funds that would be used to purchase troubled real estate-related securities from financial institutions. Under plans unveiled by Treasury, for every $1 of private investment, Treasury would invest $1 and could provide another dollar in a nonrecourse loan. That money could then leverage a loan from another government fund backed mostly by the Federal Reserve, a step that Barofsky said would dilute the incentive for private fund managers to exercise due diligence.

Barofsky recommended that Treasury not allow the use of Fed loans "unless significant mitigating measures are included to address these dangers."

Treasury officials maintain that the public-private program is the best response to the troubled loans and securities clogging the system. They say that if government did nothing, the financial crisis could linger for years, and that if government intervened alone by closing troubled banks and taking over their bad assets, taxpayers would be at greater risk.

They argue that private investors and taxpayers would share profits equally and that investors would be the first to lose if the asset purchase ends up losing money.

_Treasury should set tough conflict of interest rules on public-private fund managers to prevent investment decisions that benefit them at taxpayer expense.

_Treasury should disclose the owners of all private equity stakes in a public-private fund.

_Fund managers should have "investor-screening" procedures to prevent asset purchase transactions from being used for money laundering.

The report lands as the bailout plan comes under new leadership at Treasury. Last week, the White House announced it had nominated Herbert Allison, the president and CEO of mortgage behemoth Fannie Mae, to replace Neel Kashkari, an assistant Treasury secretary and a holdover from the Bush administration.

Moreover, the federal government early next month is expected to complete "stress tests" on big banks, and Wall Street worries they will show some banks in worse shape than expected. These fears drove the stock market down Monday in its worst showing in six weeks.

Barofsky's report also comes as lawmakers demand evidence that the government's role is unclogging credit and banks are being held accountable. Despite the infusion of government money, bank lending has declined and some banks have began to bristle at the oversight and restrictions attached to acceptance of federal assistance.

Barofsky's report noted that the Treasury Department has refused to adopt the inspector general's recommendation that all recipients of TARP money account for the use of their government money.

"In light of the fact that the American taxpayer has been asked to fund this extraordinary effort to stabilize the financial system, it is not unreasonable that the public be told how those funds have been used by TARP recipients," the report stated.

Though the report said Treasury is not demanding such information under a new capital assistance program for banks, Treasury informed lawmakers last week that recipients of that money must provide monthly reports that show the volume of new loans.

"Over the last two months, we've significantly increased the amount of transparency into the programs, including actively measuring lending and requiring banks under the new capital program to report on how every dollar of government resources goes toward increasing lending to consumers and businesses," Treasury spokesman Andrew Williams said.
Posted by Mz.Many Names at 9:36 AM