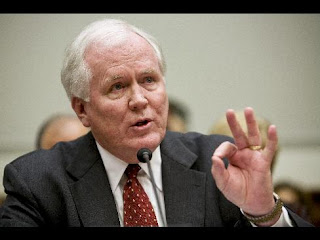 
By Mark Pittman and Hugh Son

The AIG chief owns 27,129 Goldman Sachs shares, the bank said in a regulatory filing last year. Liddy got most of the shares over five years as a board member of New York-based Goldman Sachs. AIG, also based in New York, said in a Nov. 25 statement that Liddy would be paid a salary of $1 a year plus an unspecified stock grant.

AIG received a government bailout now valued at $182.5 billion, the largest in the nation’s history, and paid Goldman Sachs $12.9 billion after receiving U.S. funds. The payments helped settle transactions including credit-default swaps backed by AIG. Goldman Sachs was the biggest recipient of AIG payments after the bailout, and lawmakers including Representative Elijah Cummings have questioned why the insurer didn’t get better terms in the settlement.

“It turns out that he has a personal multimillion-dollar stake in what turns out to be the biggest counterparty of AIG and the company that has received the largest amount of the bailout money given to AIG, namely Goldman Sachs,” U.S. Representative Alan Grayson, a Florida Democrat and a member of the House Financial Services Committee, said yesterday in a phone interview.

Liddy, 63, stepped down from the Goldman Sachs board last September to become AIG’s chief executive. Henry Paulson, then- Treasury Secretary and a former Goldman Sachs CEO, had asked Liddy to run AIG during the government rescue. Liddy was paid mostly in Goldman Sachs shares during his time at the bank, AIG has said. He declined to comment yesterday.

“While we are sorry he can no longer serve on our board, we are proud that Ed is taking on such an important responsibility during this critical time,” said Lloyd Blankfein, CEO of Goldman Sachs, in a Sept. 26 statement. “His judgment, financial acumen and deep interest in the culture of our firm have benefited our people and our shareholders.”

Liddy “views his role as CEO in essence as a public service,” according to an e-mailed statement from AIG spokeswoman Christina Pretto. “In September, he was asked by the government to step in and restructure the company, and the company has made substantial progress in doing so.”

Liddy’s “initial compensation will consist entirely of equity grants, showing his confidence in AIG and its team,” AIG said in the November 25 statement. He won’t receive an annual bonus for 2008 and 2009, and may be eligible for a special bonus for extraordinary performance payable in 2010, the company said.

“He’s not doing this for the money,” said Robert Haines, an analyst at CreditSights Inc. “He’s been rewarded handsomely by working in the insurance industry and he wanted to be a good corporate citizen.”

Liddy led Allstate Corp., the largest publicly traded U.S. home and auto insurer, for eight years through 2006. He joined Allstate in 1994 to oversee the spinoff from retailer Sears Roebuck & Co., where he had been chief financial officer.

Liddy owned 1.9 million shares of the insurer as of January 2008, according to an Allstate filing from April 2008.

AIG’s payments didn’t affect Goldman Sachs’s profit, Goldman Sachs Chief Financial Officer David Viniar said April 14. Goldman has said that it had cash and liquid securities as collateral against its exposure to AIG and had bought credit- default swaps as protection in some cases. Michael Duvally, a spokesman for the bank, declined to comment.

“I don’t think there was any double-dealing to help Goldman Sachs, but AIG has suffered such disastrous public relations over the past several months,” said Haines. “Anything that could be construed as negative or sinister is going to be brought up.”

Liddy faced criticism from Congress, the public and President Barack Obama earlier this year amid revelations of bonuses being paid to AIG employees. Liddy defended his record in a letter to Treasury Secretary Timothy Geithner in March.

“My only goals are to have AIG repay, with interest, to the maximum extent possible, the assistance the American taxpayers have given it, and to continue AIG’s main insurance companies as strong, thriving businesses and contributors to the economy,” Liddy wrote. “My only stake is my reputation.”

AIG said it owed about $46 billion of a $60 billion federal credit line as of April 2. The bailout package includes a commitment for $70 billion in capital, plus loans and asset guarantees.

About two-thirds of Liddy’s Goldman Sachs shares are restricted from being sold until May 31, according to an April 2009 filing. The stock’s value shrank to as little as $1.4 million on Nov. 20 when Goldman Sachs shares plummeted to $52, the lowest price since the company went public in May 1999. Since then the shares have rebounded to more that $120, and the stake has risen by about $180,000 since he took the AIG job.

The amount of his stock grant was reported this week in the online Washington Examiner.

“If I knew about it when Liddy came to testify, I would have definitely had a lot of questions,” Grayson said, referring to congressional hearings held in March. “Nobody is that rich that they don’t care about $3 million.”

Neil Barofsky, special inspector general for the Troubled Asset Relief Program, is probing whether AIG paid more than necessary to banks including Goldman Sachs. Barofsky is trying to determine whether AIG or the government sought to reduce the payments, according to an April 3 letter to Cummings. The Maryland Democrat requested the probe along with 26 other members of Congress.

“Even the appearance of conflict of interest is a reason for alarm,” Cummings said yesterday in a statement about Liddy’s Goldman Sachs stock.