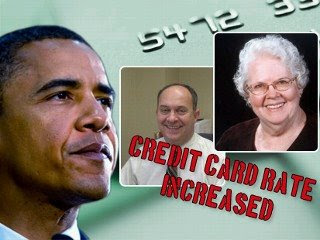 Credit card customers like Daniel Doucette and Trish McComas, pictured above, have seen their interest rates spike above 20 percent. Will efforts by President Obama and Congress offer them relief?

Both Trish McComas, 69, of Indianapolis and Daniel Doucette, 54, of suburban Cincinnati, have recently seen their credit card interest rates spike above 20 percent -- 29.4 percent for McComas and 23.9 percent for Doucette -- even though both say they're always on time with their payments.

McComas said she was "appalled," while Doucette said he was stunned credit card companies were allowed to do that.

"Your interest rate goes from 7.9 percent to 23.9 percent because they can," he said. "It just amazes me that the government would even allow that process to happen."

Whether the government will, in fact, allow such hikes to keep happening is a popular topic in Washington, D.C., these days.

The Federal Reserve and other government agencies have already announced new credit card rules, including limits on when banks are allowed to raise interest rates, but they don't go into effect until next year.

The White House meeting comes amid outcry over rate increases and other fee hikes by banks -- developments that are especially unwelcome given the billions that taxpayers have spent shoring up now-profitable banks through the government's Troubled Asset Relief Program, critics say.

But banks contend that they still have recession-related woes: Though several major banks have announced higher-than-expected profits for the first three months of the year, they're also seeing escalating losses in their credit card businesses thanks in part to consumers who default on their credit card .

Citigroup, which has received $50 billion in TARP funds, saw its credit card business revenue decline more than $800 million for the first three months of the year in comparison to 2008. Bank of America, which got a $45 billion TARP injection, wrote off nearly $3.8 billion in defaulted loans in first three months of 2009, an increase of nearly $1.4 billion over last year.

Increased interest rates for some Bank of America customers "is about properly pricing our portfolio either based on risk or realigning a portion of the portfolio that is priced below what is prudent in the current market," bank spokeswoman Betty Reiss recently told ABCNews.com

Scott Talbot, the chief lobbyist for the Financial Services Roundtable, a lending industry group, said banks need to keep their profits up -- including credit card profits -- to repay the government.

Because the government has invested in the banks, "the taxpayers need the banks to make money from all lines -- that's their job," he said.

While banks may be eager for the White House meeting -- an industry source told ABC News that some banks had been pushing for invitations -- they're objecting to the proposed credit card rules, including one that that will allow credit card companies to raise rates on existing credit card balances only when card holders are more than 30 days late, when they are receiving a promotional interest rate with a defined expiration date, or if the interest rate is tied to a specific market index, such as the London Interbank Offered Rate.

That provision is included in both the Federal Reserve's new rules and legislation sponsored by Maloney that was passed Wednesday by the House Financial Services Committee.

Kenneth J. Clayton, of the bank industry group the American Bankers Association, said in statement Wednesday that the Maloney bill could have "a negative effect on lenders' ability to offer reasonably priced credit to consumers and may make matters worse for the broader economy."

Banks say that if they can't raise rates or take other measures to hedge against risky borrowers, they may end up offering less in the way of credit or instituting higher interest rates on everyone, including low-risk borrowers.

Banks also argue that, notwithstanding the uproar over rising rates, only a small proportion of consumers have actually experienced rate hikes recently -- just 10 percent, according to Talbot.

That statistic would probably come as cold comfort to McComas, a customer with Capital One, and Doucette, who has a JPMorgan Chase credit card.

Both banks told ABCNews.com that they would not comment on specific customer cases, but Capital One said the 29.4 percent rate that McComas complained of is only charged to consumers who paid their bills late twice within 12 months. But the bank said that it had announced regular interest rate hikes for some customers in February.

"Because the credit and lending environments continue to be challenging, the account changes are necessary in order for us to appropriately account for the increased risk of lending to consumers in an economic downturn," Capital One spokeswoman Pam Girardo said in an e-mail to ABCNews.com.

Chase, Doucette's lender, told ABCNews.com that it "is a responsible, careful lender, and we constantly evaluate the risks and costs of funding credit card loans."

"When necessary, we make changes to pricing, terms or credit lines based on borrower risk, market conditions and the costs to us of making loans," the bank said in an e-mail. "... We recognize some customers may be affected by these changes for the first time and, as always, we are working hard to provide consumers impacted by these changes with alternatives."

Doucette said he called Chase about his alternatives but got nowhere. So, instead, he's working on paying the card off and then cancelling it.

"The banks," he said, "will just have to suffer without me as a customer."